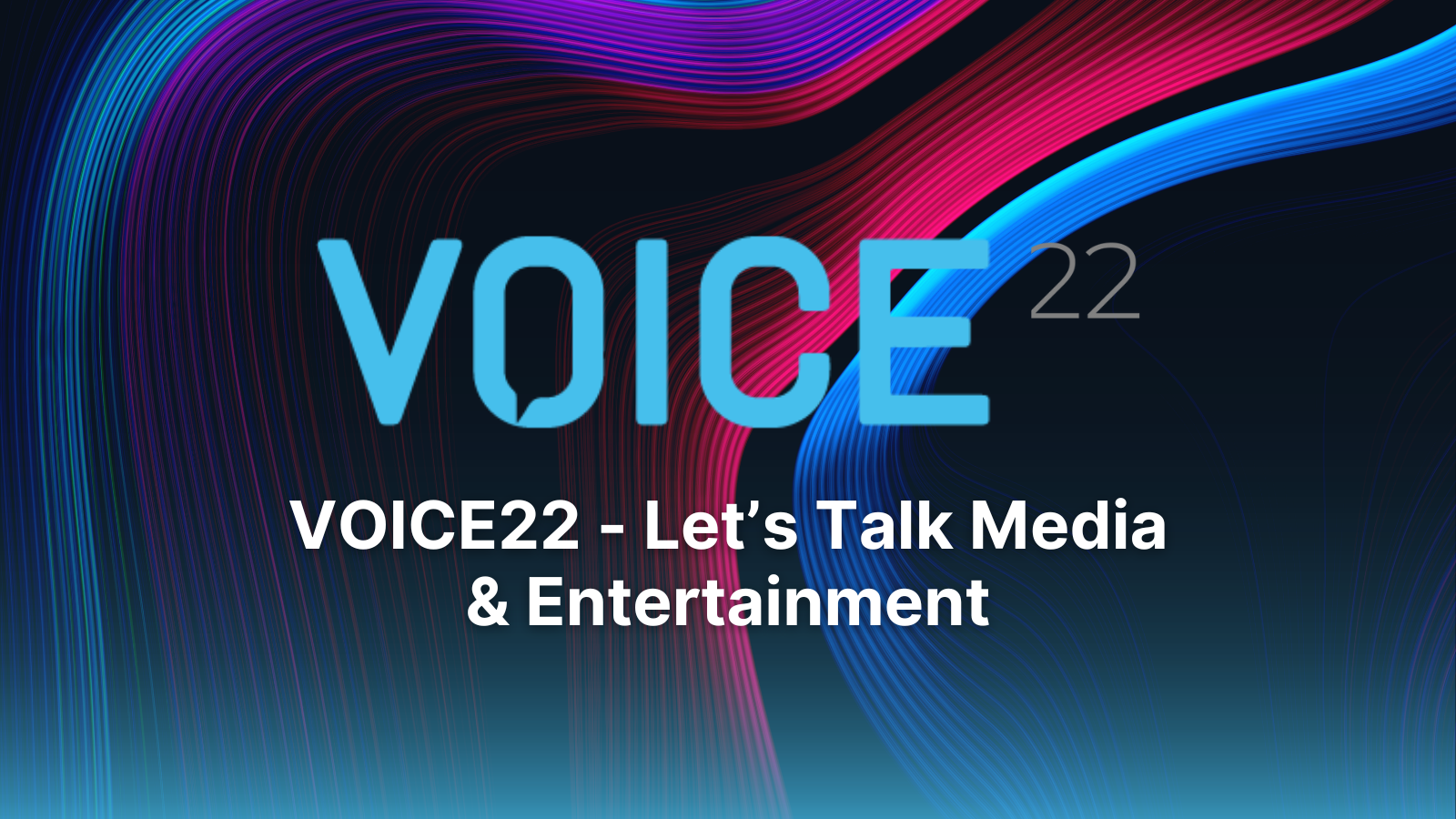 But while the above examples represent clear success stories, the integration of voice tech in the media & entertainment industry is poised to produce new immersive experiences that are more user-focused.

And that's what we're going to talk about at VOICE22.

VOICE22 will be taking place in Arlington, VA, from October 10th to the 12th. The event is filled with keynotes, workshops, and panels - all presented by voice tech leaders worldwide. Our speakers will demonstrate how to be at the leading edge of interactive technologies and how that can translate to more audience engagement and brand loyalty within the media & entertainment landscape.

Beyond that, you'll learn how AI-powered voice tech can help invigorate your organization's product and service offerings and how to use that as a gateway to sustained growth in a future that may well leave old business models behind. The digital transformation is real, and voice is one of its primary drivers.

If you're in the media & entertainment industry, we'd love you to be part of the discussion.

Making Every Game and App More Accessible with .NET and AI

On October 11th, at 4:30 PM, Alex Dunn, Chief Product Officer at Voicify, will recount the story of building Project Enabled Play. Project Enabled Play is a platform built in .NET on Azure that allows users to turn their voice, facial expressions, hand gestures, smartphones, watches, virtual inputs, and more into a gaming controller, keyboard, and mouse on any platform.

Throughout his talk, Alex will discuss scaling applications in .NET to various platforms and channels with accessibility as a chief concern to even the playing field. He hopes that you come away with an understanding of voice and conversational platforms, real-time communication technology, computer vision, and best practices for sharing code and moving from proof-of-concept to product.

This talk is about creating a new generation of experiences that goes beyond simple buzzwords. As part of Alex's talk, you can try your luck at playing a popular video game with your voice or writing a block of code with your face. Don't miss it.

On October 12th, at 1:20 PM, Jess Thornhill, Director of User Experience at Volley, will be joined by Jordan Mirrer, Director, Interactive Games at Sony Pictures Entertainment, to talk about the success of game shows for voice.

Indeed, major game show brands have been among the most successful games on voice platforms. Case in point, Volley even concluded a deal with The Price is Right owner, Fremantle, that brought a voice game version of the game show to its platform just in time to celebrate the show's 50th anniversary. And it was a massive success.

As part of their talk, Jess and Jordan will delve into the reasons behind the success of game shows for voice. They'll also share their insights into how to "convert" a classic game show to a voice interface and discuss the ongoing challenges in that space.

Their joint talk will also examine which brands align well with a voice treatment (spoiler: Jeopardy!). They will also break down the user experience into its essential parts (like play patterns and expectations) while emphasizing the importance of content. It's sure to be a conversation starter.

Jeff knows a thing or two about integrating voice tech into various industries. Voicify works with a diverse client base which includes Volkswagen, Audacy, Campari, and Johnson & Johnson. And the Voicify platform enables its users to do things like locate a charging station while driving their electric car, enjoy a virtual whiskey tasting with Matthew McConaughey, or obtain a personalized recommendation for allergy pills.

Jeff will discuss the ins and outs of these reimagined customer experiences as well as the reasons behind the success of the tech (i.e., voice) that made that transformation possible. A statement made by McMahon provides a window into what we can expect to hear: "One interesting thing driving growth is that people often want to have human-like interaction, but they don't necessarily want to talk directly to a human on the phone." It will be an eye-opening talk.

The above highlights represent a small preview of what you'll find at VOICE22. Voice within the media & entertainment space has produced some of the most transformative user experiences. As we gear up for the next round of innovations that push the boundaries of what's possible, we're sure to create more immersive user experiences that border on science fiction while providing sustained industry growth. We hope you'll be part of the conversation. Join us for VOICE22, October 10th to the 12th, and be part of the future of voice in media & entertainment.

You can view the agenda to see the complete list of speakers and get your ticket here.