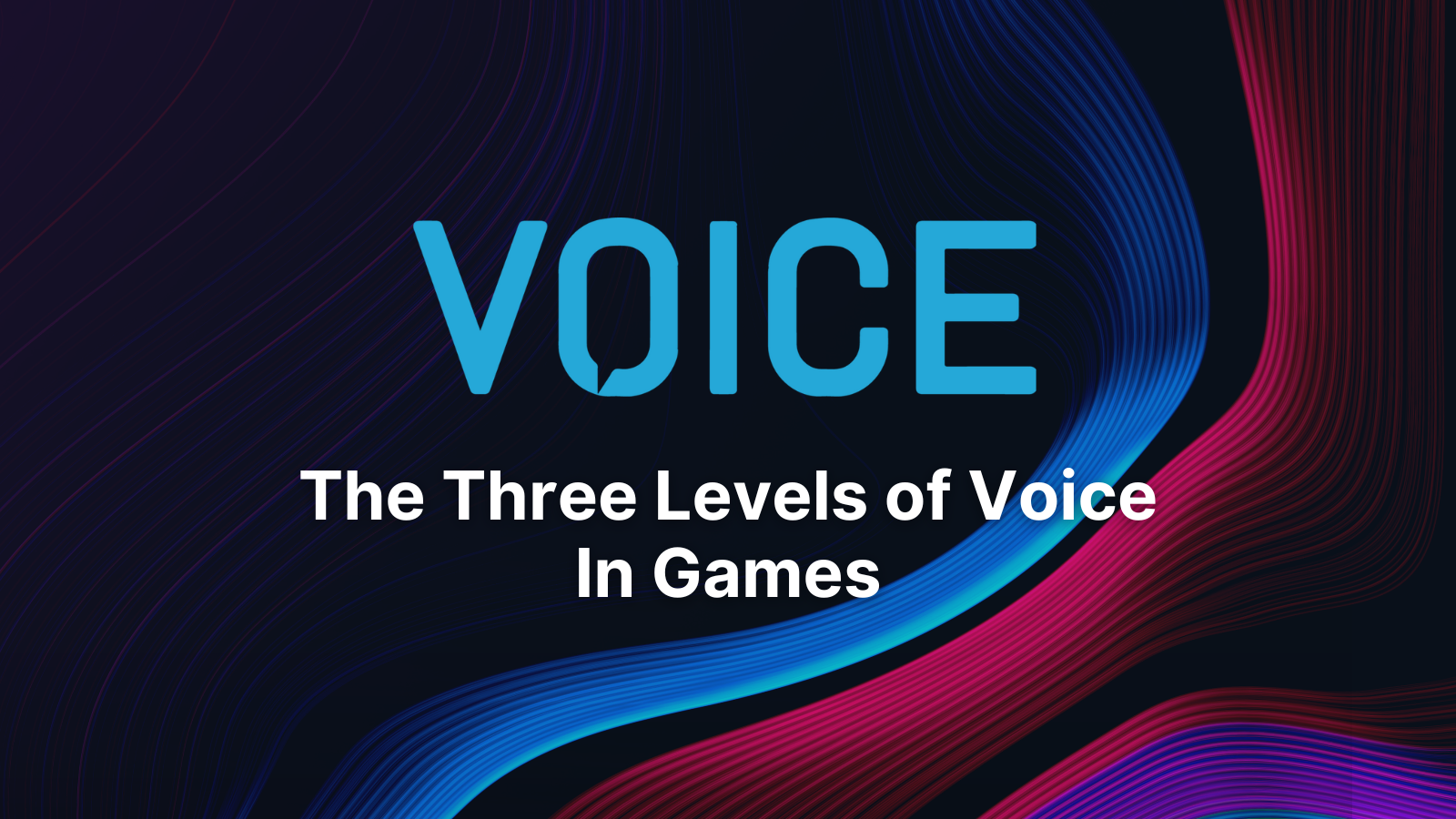 The Three Levels of Voice In Games

Voice is really becoming a natural interface to interact with tech, with more and more industries integrating conversational AI into their products/applications. And the gaming industry is among them.

Video games today are hyper-realistic and immersive. And for many big-title games, controllers (joysticks and keyboards) really fall short of the otherwise experienced realism in the game. In trying to fix that issue, voice naturally presents itself as the solution to provide gamers with an intuitive interface that allows them to control many in-game elements.

Voice is a fantastic interface within a video game setting because of all the recent advances in AI and Machine Learning. Voice interfaces today are remarkably good at understanding and interpreting natural human speech - going as far as determining the player's emotional state. And voice interfaces, in many respects, provide a far smoother and more enveloping gaming experience than the traditional interface devices we all know.

In this post, we'll look at some of the more important ways voice tech is currently used in video games, in what we’re calling the three levels of voice in games.

Level 1 is the most basic voice integration in games. But it’s also the most intuitive and the easiest to implement.

Many of today's big title games are online multiplayer games in which the players need to develop a strategy together and accomplish different tasks to complete the various levels. That obviously requires the possibility of continuous dialog between players and contributes to creating an interactive and collaborative environment.

So in-game chat between players is probably the most common way voice tech is integrated into video games. It enables players to share tactics, warn each other of threats, and instruct other players within the group.

Also available to gamers are third-party voice chat apps, like TeamSpeak and Discord. With these apps, players can spin up a chat server quickly and easily (typically within minutes) that the other players can join. While both in-game and third-party chats provide most of the same benefits, the third-party may provide more user privacy.

Now it's getting to be a bit more interesting. Level 2 enables gamers to use their voice as the game’s primary interface. With voice interfaces, gamers don't need to mess with a game controller; they can simply tell their character what to do. They can have their character jump, hide, run, enter a room, or change weapons at the behest of a simple voice command.

The above can be a particularly compelling interface for strategy games, where it can be much simpler to command the game with your voice than it is to click around various menus to execute an action. But whatever the kind of game, a voice interface is far less intrusive than a controller and allows gamers to be more immersed in the game. It really changes the gaming experience, to be sure.

Currently, most video games that allow voice control may still require you to use a traditional controller for certain things. But as we move forward and the tech grows, you may eventually forget about your keyboard or joystick as you game.

While voice interfaces for PC or console games are certainly an enhancement in the gaming space, there are also fully voice-based games that can be played on smartphones or smart speakers. With Level 3, you’re basically turning your smartphone or speakers into a makeshift gaming console with voice-based games.

And these types of games are proving to be extremely popular. Earlier this year, matchbox.io, the company that brought us some of the most popular voice-based games - namely with its "Question of the Day" title, a daily trivia voice game - was acquired by Volley, one of the most prominent voice game publishers today.

Many large entertainment brands also collaborate with smart assistant vendors to bring voice-first games to their platforms. Some examples are Nickelodeon's Sponge Bob Challenge, Hasbro's Trivial Pursuit, and The Pokémon Company's Pikachu Talk, which brought those titles to Alexa devices. There is no doubt that voice-based games are growing the Games market and will continue to do so for the foreseeable future.

It's quite clear that voice, in all its technological permutations, provides the gaming industry with many new opportunities - not the least of which is making games more immersive and accessible than before. Voice in games has really taken hold in recent years, with many big-name vendors providing developers with everything they need to integrate voice into games. Whether your goal is to integrate voice chat or voice control into games or to develop voice-based games, brands are on board.

We don't believe that traditional controllers will become obsolete. But we believe there will come a point when we don't instinctively reach for a controller when we want to play a video game.

The future is vocal - and that applies to games as well.