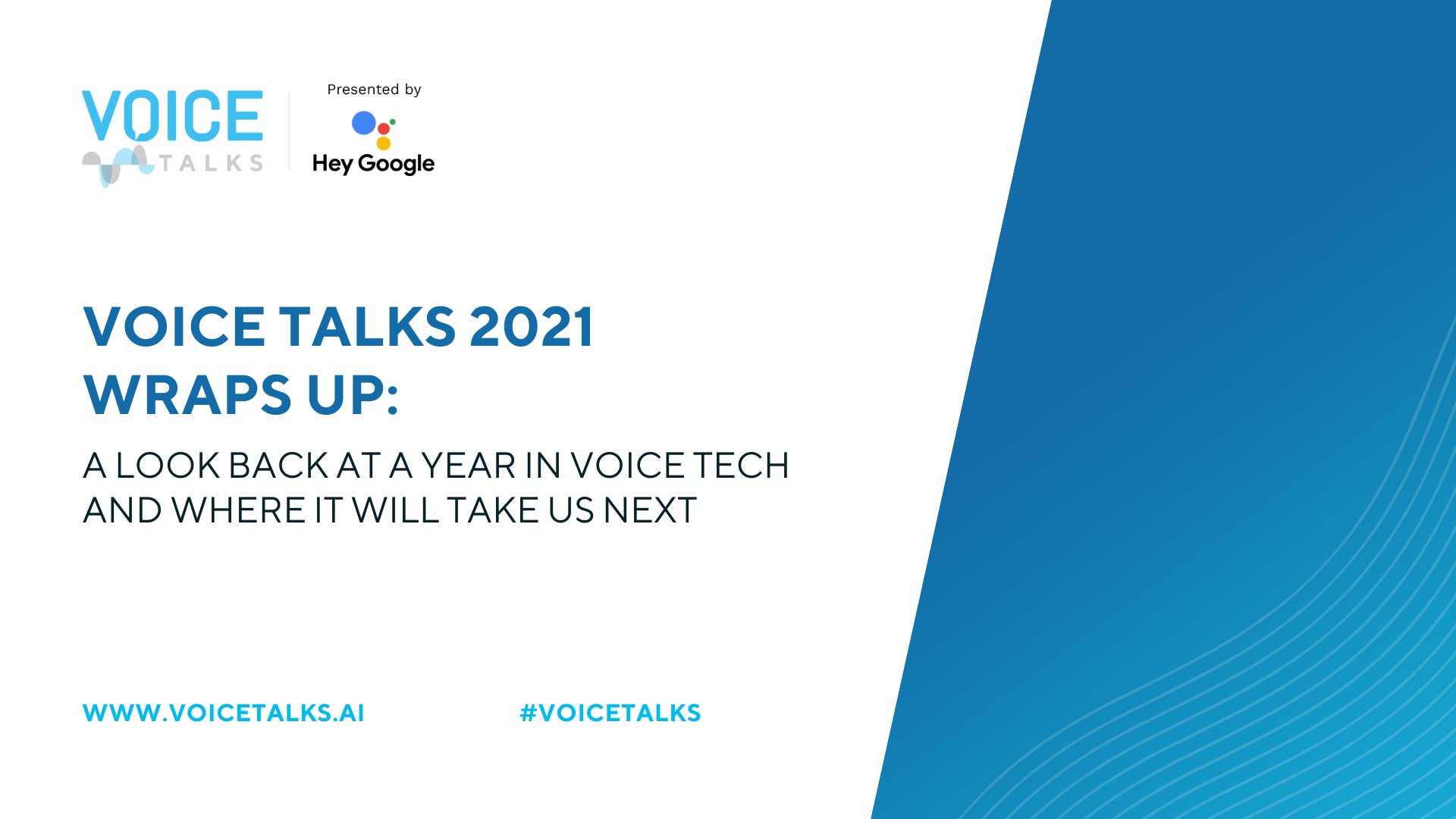 VOICE Talks 2021 Wraps Up: A Look Back at a Year in Voice Tech and Where it Will Take Us Next

VOICE Talks last episode of 2021 wrapped up last week as Modev CEO Pete Erickson moderated a panel of industry experts taking a look at the advancements in voice tech that occurred in the last year. Drawing upon their expertise, our panelists also shared their insights on setting up or refining your organization's voice strategy. And they closed with a look to the future, as each panelist explained where they believe this transformative tech is headed in the near future.

The panel consisted of Richard Stern, CEO of TuneIn, Diana Mingels is an Artificial Intelligence expert,  who leads the NLG and NLU departments at Capital One Bank, and Andrea Huels, Head of AI, North America at Lenovo.

Their discussion spanned three major industries that are each leveraging the power of AI-driven voice tech: FinTech, finance, and banking (Mingels), media, entertainment and broadcasting (Stern), and hardware devices (Huels) - providing an engaging and comprehensive view of the state of voice tech.

Looking Back and Looking Forward

The panel's main focus was a retrospective on the past year in voice tech, bringing to light the lessons learned and how those lessons relate to those wanting to deploy or improve their own voice strategy.

Andrea Huels opens the discussion by talking about customer expectations. Coming from the world of hardware, of the infrastructure that enables AI, she noticed just how much the expectation levels have spiked over the last year. The pandemic drove increased adoption of video calls and smart speakers, among other things. But that increased adoption came with a requirement: users' expectations of crisp video, clear audio, and fast and responsive UIs. And moving forward, that expectation needs to be understood as a minimum requirement. Customer expectations have raised the bar for voice tech.

Turning to the future, she points to Edge computing as one of the big trends for voice tech in 2021. She believes that moving forward, speed and the removal of transactional friction will be critical to the development of voice. With its improved performance compared to cloud computing, Edge computing can bring to market the next generations of voice experiences.

As Richard Stern reflects upon the last year, he cites that the heightened adoption of endpoints (smart speakers, voice assistants, etc.) brought on by the pandemic hasn't dwindled as society started to open back up again. So the voice tech industry now has more users than ever - and that's the new normal for voice tech moving forward. It also illustrates just how indispensable AI-powered voice tech has become in our daily lives.

Another point of interest for Stern is that, as opposed to 2020, people's interest in certain types of jobs has waned. And he cites the recent mass resignations in the customer service sector as an example. That represents an opportunity for voice tech to step up and fill in the gap. As he says, "I think it's the first time, as an industry, that we've looked at this and said, hey, wait a minute, we're not displacing workers, we're not replacing human beings, we're actually filling a void. And that's a wonderful way to lean into technology, and that wasn't true last year."

And his take on the future of voice tech is informed by his own kids. They grew up in a world with voice assistants from day one. That new generation will carry those "vocal" preferences forward. And he predicts that will accelerate the growth and development of the entire industry and make possible rich experiences we have a hard time imagining at this point in time.

The Explosion of Conversational AI

Diana Mingels believes the past year's biggest highlight is the unprecedented growth of conversational AI. As she states, "I see tremendous growth in conversational AI all over the globe. According to Gartner, there are over 2000 natural language technology providers today, with a very large number of those offering conversational AI services."

And companies, large and small, are adapting to this trend. One source of excitement for Mingels is that many of the companies jumping on the conversational AI bandwagon are startups. Why does this matter? She tells us that because a startup's brand is not as established as that of a large company, they tend to compete more and try to differentiate themselves from the pack more. That leads to innovation that translates to user-friendly AI tech, capable of understanding different accents, multiple speakers at the same time, and even children's speech - which was notoriously difficult to grasp and the ability to interpret emotional states.

Mingels sees three significant developments for voice tech in the near future:

And they are actually all tied together. As Mingels tells us, rendering smart appliances easier to set up and use makes the tech more accessible and promotes growth. That increased accessibility paves the way to the design and marketing of voice tech for children. But to get there, we need to make sure we have strong privacy and security safeguards built into the tech so that we don't end up with unintended and undesirable consequences on our hands. Mingels sees a bright future for voice tech as long as we design and develop it responsibly.

There was one more thing…

It was an eye-opening discussion with some of the voice tech industry's most prominent players. After the talk, as a bonus to attendees, we were treated to a brief segment from Google Assistant Developer Relations team's Mike Bifulco.  He walked us through the powerful Speech Synthesis Markup Language (SSML) and how it can make your conversational apps more natural and engaging - and we were impressed.

It's an episode you won't want to miss. You can view this episode and previous episodes on the VOICE Talks Youtube channel.

Produced by Modev and presented by Google Assistant, the award-winning VOICE Talks is the fastest-growing internet technology show featuring industry leaders discussing the latest developments relating to AI-powered voice technologies. Developers, marketers, gamers, and voice tech enthusiasts can tune in live or share their video stories in advance with the show's host. Subscribe at www.voicetalks.ai or follow @VOICETalksAI on Twitter, @VOICETalks on Instagram, Facebook, or LinkedIn.