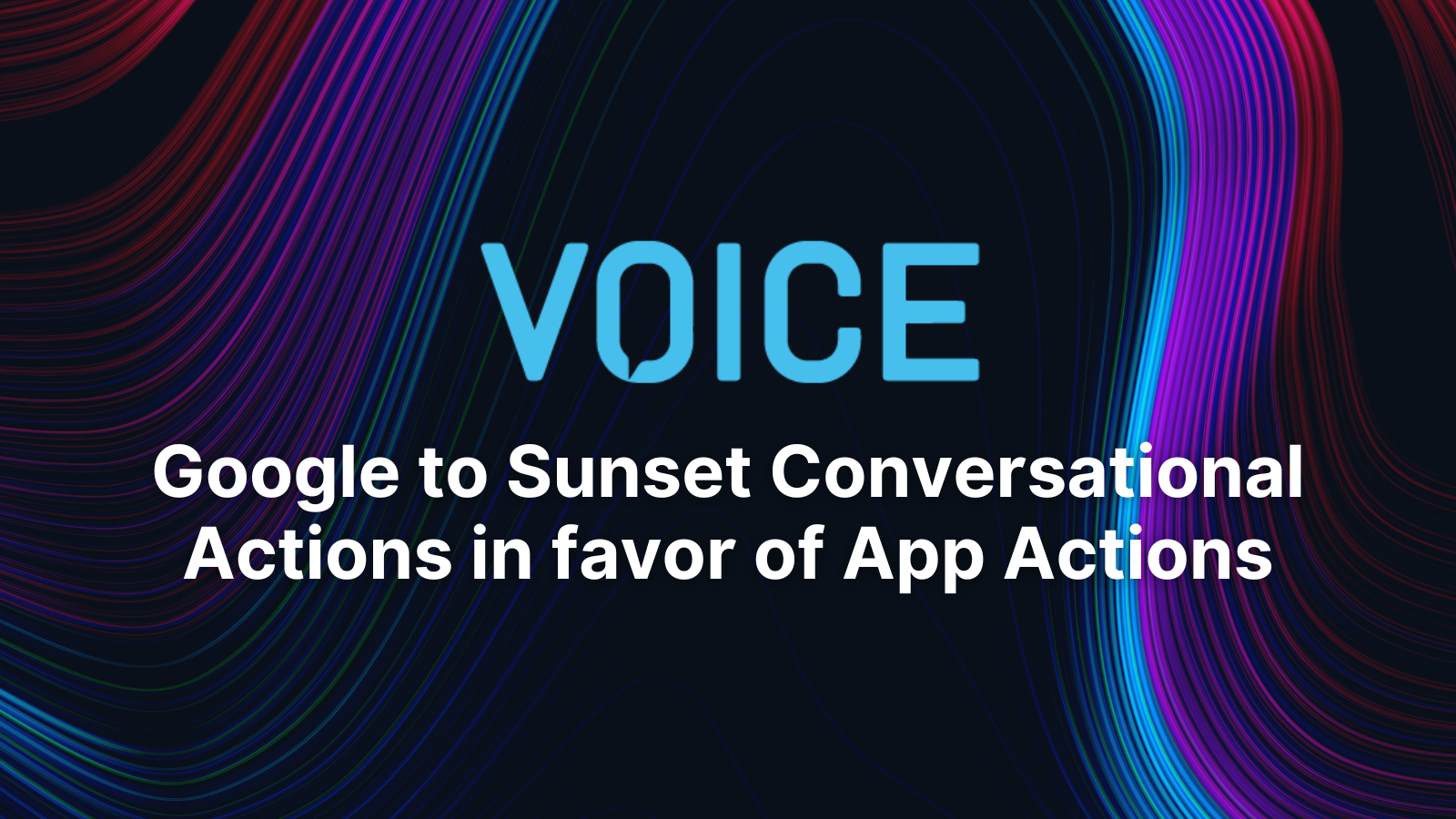 Google to Sunset Conversational Actions in favor of App Actions

Google just announced that it will sunset Conversational Actions on Android in favor of App Actions. Both have coexisted for some time now within Android and will continue to do so until June 2023. After that, only App Actions will be available to create voice experiences in Android. This impacts voice capabilities across all Android devices, like mobile, auto, wearables, and other devices in the home (smart speakers, for example).

But what exactly are the differences between Conversational Actions and App Actions? And what does this change mean for developers? That's what we're going to tackle in this post.

What are Conversational Actions?

Invocation: Invocations determine how users let Google Assistant know they want to start a conversation using one of your defined Conversational Actions

What are App Actions?

Unlike Conversational Actions, App Actions actually extend your existing in-app functionality to Google Assistant, giving users voice access to your app's features. App Actions are enabled by specifying one of the many built-in intents (BII) in your shortcuts.xml file. BIIs model common ways in which users express their queries.

When a user triggers an App Action, Google Assistant will match the query to the BII(s) you specified. It then generates an Android Intent (based on your <capability> tags in shortcuts.xml) and launches your app at the requested page/screen or displays an Android widget based on the requested functionality.

With App Actions, Google Assistant does all the heavy lifting. It analyses the natural language input, matches it to your BII, generates an Android Intent, and fulfills the request by opening your app at the appropriate screen (or displays a widget).

The answer to that question is two-fold. First, user feedback informs Google that users want to engage with their apps using their voice. Second, based on its developer feedback, Google is aware that developers want to build upon the existing functionality in their apps rather than have to code separate voice experiences for pre existing features.

App Actions are the answer to both concerns. They enable deeper integration with apps' functionality to provide users with rich and natural voice experiences. And they allow developers to leverage their apps' existing features to convert them to voice experiences without having to code everything from scratch.

As Rebecca Nathanson, Director of Product from the Assistant Integration Developer Platform, stated, "Based on analytics and feedback from users and developers, Google has decided App Actions is the best path forward for delivering the biggest ROI for developers. One of the things that we've heard from our users is that while voice-first is a great addition to the world of technology when it's detached from all the other ways that users interact with the services and apps that they're already familiar with and love and use on a daily basis, it's not nearly as compelling for them. At the same time, we heard from developers that it's challenging to create a voice experience using Conversational Actions as a standalone product. You have to start from scratch every single time.

So those are the differences between Conversational Actions and App Actions. And I feel that just laying out their differences, as we did, makes it pretty clear that Google is making the right decision. App Actions provide better experiences and make developers' lives easier.

Also, AI-powered voice tech is still somewhat new. That means that as the industry grows, new things suddenly become possible. And to capitalize on those possibilities, changes need to occur, so those who build these experiences have the right tools.

That's why Google is making that change, and we look forward to seeing what kinds of new voice experiences that change will provide.