Did you feel it? OpenAI, a nonprofit artificial intelligence research firm, just raised Conversational AI's standard significantly with their release of ChatGPT. Yes, it's another conversational AI chatbot. But this one doesn't just play the game; it's a game-changer.

Let me show you why.

How Does ChatGPT Work?

ChatGPT is a transformer - and the GPT portion of its name stands for Generative Pretrained Transformer. A transformer is a deep-learning model based on a mechanism of self-attention. The AI assigns a differential weight to the significance of each part of the input data. And this attention mechanism provides sufficient context at any position in the input sequence for the transformer to process the entire input simultaneously rather than one word at a time. That, in turn, allows for multiple threads to run in parallel, reducing training times and producing much more natural-sounding and relevant outputs.

That enables ChatGPT to go way beyond simply responding to one-off queries. It can answer follow-up questions, admit its mistakes, challenge incorrect premises, and reject inappropriate requests, according to OpenAI.

ChatGPT's conversational framework is thread-based, meaning it can build upon past statements and conversations. So you can refer to things you said in previous discussions, and ChatGPT won't skip a beat - it'll immediately know what you're talking about - just like an actual human. Impressive.

Not only that, but the same input won't invariably produce the same output. ChatGPT's responses are continually being informed by the content of your previous statements. So as the conversation evolves, so does ChatGPT. You can click a Try Again button if you want ChatGPT to reprocess a given input. And should you wish to reset ChatGPT and start over from scratch, you can click the Reset Thread button.

So what can ChatGPT do beyond playing questions and answers?

Many, many things. But before we move onto that, bear in mind that while ChatGPT does not search the internet to fulfill its queries, it has a dizzying amount of knowledge on numerous topics baked in. Curious about quantum physics? Have a chat about it with ChatGPT.

How about asking ChatGPT to review a piece of code you just wrote to identify any issues? Check. How about getting it to write a Python script? It can do that too, and it has. There's actually an example of ChatGPT debugging code on OpenAI's website.

How about asking it to write an acquisition rationale for the Board of Directors from the company's CFO? It can do that too. Check out this video of ChatGPT doing precisely that. There's even someone who got ChatGPT to write a simple "DOOM-style" first-person shooter game "with locomotion, camera controls, obstacle collision, and a working gun."

OpenAI's ChatGPT marks a critical milestone in conversational AI. It's the new baseline, the new reference everyone else in the field will have to answer to. The latter cannot be overstated.

One Million and Counting…

Over a million users have tried ChatGPT less than a week after its launch. And the reactions have been overwhelmingly positive, as evidenced by some of the many enthusiastic tweets & retweets buzzing across the Web. 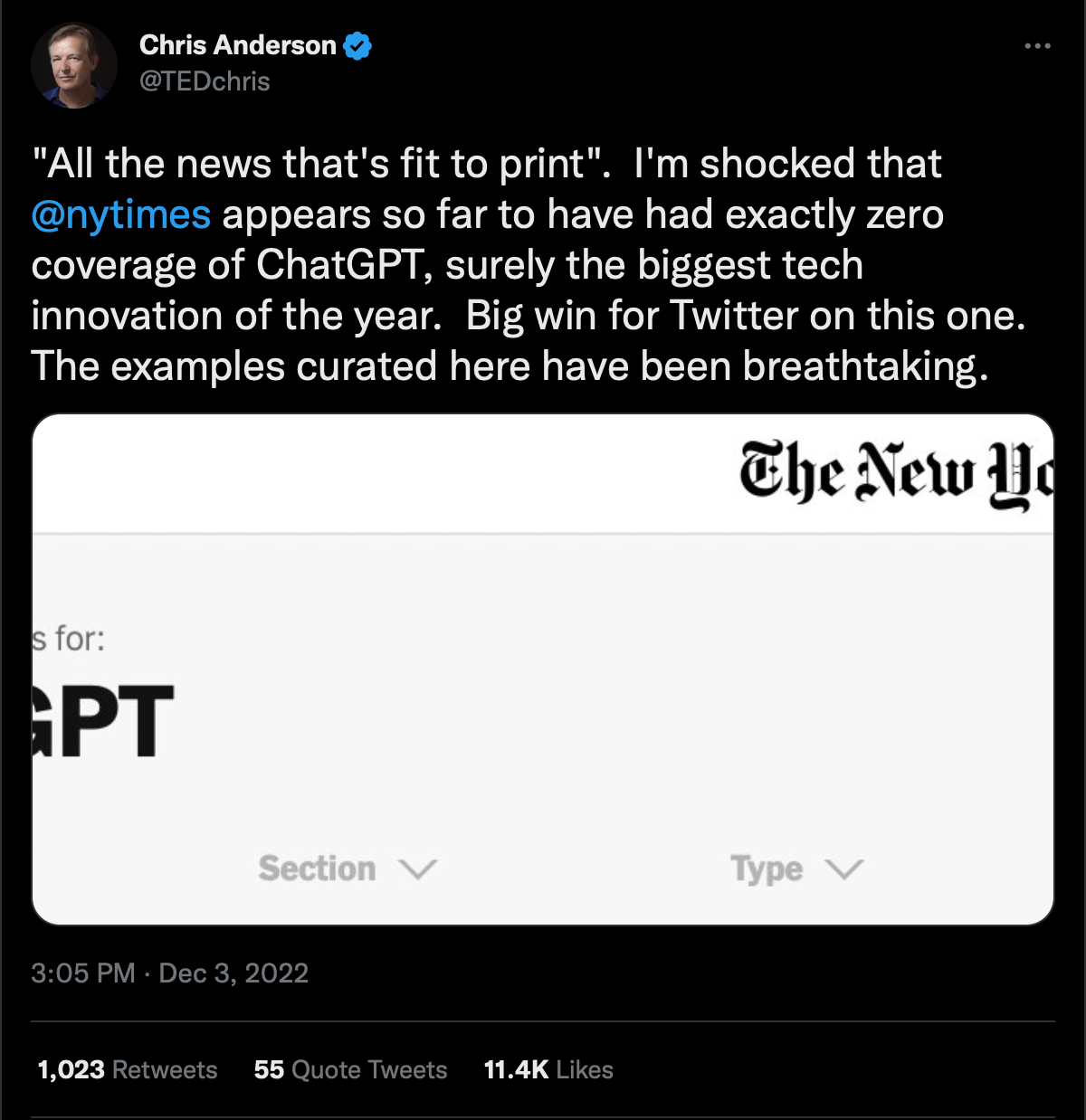 Scroll through this Twitter feed to see some of the creative ways people have been using ChatGPT - and the incredible outputs it produces. Users are loving it so far!

While ChatGPT is fun to play around with, it has the potential to change how humans communicate with businesses. Given the number of "skills" ChatGPT is capable of, and how natural its responses are, its applications for businesses across industries are almost limitless and stand to benefit both organizations and their customers.

Just imagine the user experiences ChatGPT could provide in a customer service setting. There would be very few instances where ChatGPT would need to transfer the customer to a human agent. It could make rate plan recommendations to customers, provide a historical overview of their transactions, and explain new or unused features, among many other things.

How about having ChatGPT provide technical support to customers? It could troubleshoot issues, ask the customer relevant questions, test solutions, and instruct customers on what to do next. Just imagine the potential for apps and websites interfacing with ChatGPT to provide users with relevant conversational instructions and explanations.

As for users in a business context, given ChatGPT's awe-inspiring ability to answer follow-up questions, self-correct, and reject non-pertinent requests - all in a natural conversational tone - they get an immersive and efficient customer experience without needing to be bounced across departments and representatives.

ChatGPT can elevate the experience provided by conversational interfaces in practically any setting.

While ChatGPT is available to use, it's still a work in progress. And it does have its limits. The first of which, it's not an actual human being. It has no consciousness and no emotions. And you come to terms with that quickly when you try it. While its output is genuinely impressive - remember, it can write code - it won't be creating massive layoffs anytime soon.

That's because ChatGPT has no intention and doesn't feel anything - unlike a human being. As humans interpret the input that comes through our senses, we emote, unlike ChatGPT, prior to output. And that makes a massive difference in the output produced by humans. ChatGPT is unlikely to write A Tale of Two Cities. It's just a natural limitation of AI as we understand it today.

Also, as it stands right now, ChatGPT isn't concerned with truth, per se, but with plausibility - realism rather than reality. Depending on how you formulate your question, ChatGPT can come up with answers that sound perfectly coherent and plausible but that don't line up with the facts. That will definitely need some tightening before ChatGPT makes its way into customer service. We'll be discussing ChatGPT's limitations more extensively in future posts - and there will be a few. ChatGPT is generating a lot of chatter (pun fully intended).

OpenAI has also artificially limited its chatbot through various limiters and filters built into ChatGPT to prevent it from derailing. Remember Microsoft's Tay? I think we'd all rather avoid that. Still, ChatGPT remains in "training mode" for now, and OpenAI is eager for user feedback to help improve its bot.

OpenAI's website states, "We know that many limitations remain [...], and we plan to make regular model updates to improve in such areas. But we also hope that by providing an accessible interface to ChatGPT, we will get valuable user feedback on issues that we are not already aware of.”

You can try ChatGPT out for yourself by following the below instructions:

We've definitely crossed a threshold with OpenAI's ChatGPT. And as is pretty unique to the world of AI: things get easier as they become more sophisticated and complex. Experiences like those provided by ChatGPT were absolutely unimaginable just a few years ago; now, here we are.

We look forward to chatting about OpenAI's future innovations and ways you can implement ChatGPT in your business.